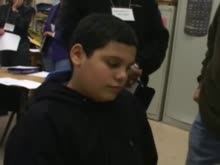 TitleEarly algebra, investigating linear functions, series 5 of 7, ladder problem, Clip 7 of 7: Combining a six step ladder with a two step ladder
PublisherNew Brunswick, N.J.: Robert B. Davis Institute for Learning, , c2005-12-15
Persistent URLhttps://doi.org/doi:10.7282/T39C6W5Z
DescriptionIn the final clip of the series of seven from an after-school enrichment session in an urban middle school, Ariel, a 7th grade boy, revisits his method for solving a specific example of the Ladder Problem. Researcher John Francisco asks Ariel explain how he had predicted the number of rods for a ladder with 125 steps. The procedure that Ariel had articulated and followed for smaller numbers had the following steps: (1) Find the closest smaller even number to the number posed; (2) divide that number by two; (3) build a ladder with that number of steps with actual rods; (4) count the rods; then (5) double that number and subtract two from the product to find the result for the even number, and finally, (6) add three to the total number of rods to find the amount of rods for the original odd number of steps in the ladder. Ariel explains that, for 125, he would divide 124, the nearest even number below 125, by 2 to find 62. He continued his explanation of using his earlier count of 198 for a ladder with 60 steps, building a ladder with 2 steps and adding the resulting 8 rods to 198 for a total of 206. Francisco challenges Ariel to actually build a ladder of 6 steps and predict the total if he were to add a second ladder of 2 steps. After Ariel completes the ladders, 20 for 6 steps, and 8 for two steps, his first prediction is 28 rods. However, before building and counting the 8 step ladder, Ariel refers to his rule and subtracts 2 from the 28 for a result of 26. When he builds the 8 step ladder, his result is confirmed and he insists that this is the same method that he had used for finding the ladder with 124 steps. Researcher Prashant Baldev is observing.
The worksheet wording for the Ladder Problem:
A company makes ladders of different heights, from very short ones to very tall ones. The shortest ladder has only one rung, and looks like this (we could build a model of it with 5 light green Cuisenaire rods.) A two-rung ladder could be modeled using 8 light green rods, and looks like this. Build a rod model to represent a 3-rung ladder.
How many rods did you use? How could you represent the number of rods needed if you were to build a ladder with any number of rungs?
The questions as posed to Ariel:
Explain again how you found the number of rods for a ladder with 124 steps.
Test your method of adding a two step ladder to a larger ladder (in this case a 60 step ladder) by building a 6 step ladder and then adding a 2 step ladder in order to find the rods for a ladder with 8 steps.
Did you use the same method for both problems?
Math ToolCuisenaire rods, Color markers
Math StrandAlgebra
Math ProblemLadder problem
NCTM Grade Range6-8
NCTM Content StandardAlgebra
NCTM Process StandardProblem solving, Reasoning and proof, Communication, Connections, Representation
Forms of Reasoning, Strategies and HeuristicsDirect reasoning, Considering a simpler problem, Recursive reasoning, Proportional reasoning
Grade Level7
Student ParticipantsAriel (student)
MediatorsFrancisco, John (Researcher), Baldev, Prashant V. (Researcher)
CorporateFrank J. Hubbard Middle School (Plainfield, N.J.)
SettingInformal learning
Student GenderMale
Student EthnicityHispanic
Camera ViewsWork view, Student view
RightsThe video is protected by copyright. It is available for reviewing and use within the Video Mosaic Collaborative (VMC) portal. Please contact the Robert B. Davis Institute for Learning (RBDIL) for further information about the use of this video.
Date Captured2005-12-15
Local IdentifierB17B18-ALG-VAR-CLIP007
Related Publication
Type: Related publication
Label: Ed.D. dissertation references the video footage that includes Early algebra, investigating linear functions, series 5 of 7, ladder problem, Clip 7 of 7: Combining a six step ladder with a two step ladder
Date: 2009
Author: Baldev, Prashant V. (Rutgers, the State University of New Jersey)