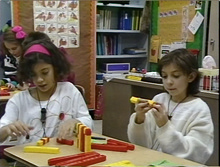 TitleB74,Combinatorics,T5T,StephDana,(People view),Grade 4,Feb 6,1992,Raw Footage.
Publisher: , 1992-02-06, c1992-02-06
Persistent URLhttps://doi.org/doi:10.7282/t3-hvhr-mw75
DescriptionIn this one hour and forty minute unedited video, the fourth grade class was divided into pairs to work on a Towers problem on February 6, 1992. At the beginning of the session, there are two sheets of paper posted on the board with the following statement:
“Building Towers
Your group has two colors of Unifix cubes for building towers. Work together and make as many different towers as you can that are five cubes high. See if you and your partner can plan a good way to find all the towers that are five cubes high and decide a way to record what you find.”