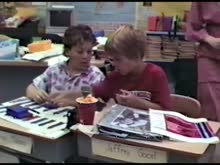 TitleTowers Group Sharing, Clip 4 of 6: Jeff and Brian work on finding towers three cubes high
PublisherNew Brunswick, NJ: Robert B. Davis Institute for Learning, 1990-10-11, c1990-10-11
Persistent URLhttps://doi.org/doi:10.7282/T3GM85Q5
DescriptionAfter a discussion in the previous clip in this series about how many towers can be built three cubes high when selecting from two colors, researcher Alice Alston asks the students to create towers three high to see how many there are, reminding the students that all the towers must be different. In this clip, Jeff and Brian create towers three cubes high from the set of towers they had created four cubes high in the Towers series. They remove the bottom cube from each tower and then remove the duplicate towers which they notice. They try to reconfigure the duplicates to make them unique, but each time realize that they already have the new tower in their existing set. As they continue trying to create additional towers, they find that the new towers are duplicates of ones that they already have and that in fact some of them match more than one existing tower, so they remove additional duplicates. As they continue to work at finding new towers, Jeff declares that he is “not convinced”. The researcher asks the pair what they think and they realize that they have more sets of “matches”, which they remove. They work some more at finding new towers, until Brian declares, “We’re convinced” and Jeff tells the researcher that there are “definitely” fewer towers. Jeff counts the towers and finds that they have seven towers. The researcher points out that one tower is missing its opposite, so Jeff tries to build a tower to be its opposite but is unsuccessful at first. The researcher shows Jeff an example of opposite towers, and Jeff makes a few more attempts at creating the opposite tower until he is successful. The researcher and Jeff then arrange the eight towers in pairs of each tower with its opposite.
Math StrandCounting, Combinatorics
Math ProblemTowers
NCTM Grade Range3-5
NCTM Content StandardNumber and operations
NCTM Process StandardProblem solving, Reasoning and proof, Communication, Connections, Representation
Forms of Reasoning, Strategies and HeuristicsCounting, Direct reasoning, Guessing and checking
Grade Level3
Student ParticipantsBrian (Kenilworth, student), Jeff (student)
MediatorsAlston, Alice S. (Researcher)
CorporateHarding Elementary School (Kenilworth, N.J.)
SettingClassroom
Student GenderMale
Student EthnicityWhite
Camera ViewsPresentation view
RightsThe video is protected by copyright. It is available for reviewing and use within the Video Mosaic Collaborative (VMC) portal. Please contact the Robert B. Davis Institute for Learning (RBDIL) for further information about the use of this video.
Date Captured1990-10-11
Local IdentifierB51-CMB-T4T-CLIP004
Related Publication
Type: Related publication
Label: Ed.D. dissertation references the video footage that includes Towers Group Sharing, Clip 4 of 6: Jeff and Brian work on finding towers three cubes high
Date: 1992
Author: Martino, Amy Marie (Rutgers, the State University of New Jersey)