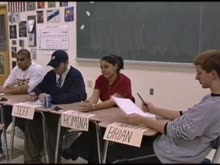 TitleB37, World Series problem (student view), Grade 11, January 22, 1999, raw footage
PublisherNew Brunswick, NJ: Robert B. Davis Institute for Learning, 2014-03-15, c1999-01-22
Persistent URLhttps://doi.org/doi:10.7282/T33R0R0Q
DescriptionAt an after-school session in the middle of their junior year, Ankur, Brian, Jeff, Michael, and Romina were introduced to the World Series problem [the problem statement is below]. The students explored various ways to solve the problem (e.g., list all possibilities, multiplying one half a number of times). Jeff and Romina recall a generalization the group had developed in a previous session for the towers and pizza tasks, 2^n. The group uses 2^n for all of the possibilities of the World Series ending and then use various strategies to determine the probabilities for each outcome. The students consider each case - winning a World Series in four, five, six, or seven games - separately and calculate each probability before moving on to the next. After approximately an hour the students produce an answer to the World Series problem, explain their strategies and justify their solution, and consider the relationship between their numerical results and certain entries in Pascal's Triangle.