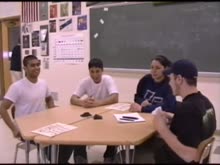 TitleB39, Revisiting the World Series problem (student view), Grade 11, January 29, 1999, raw footage
PublisherNew Brunswick, NJ: Robert B. Davis Institute for Learning, 2014-03-15, c1999-01-29
Persistent URLhttps://doi.org/doi:10.7282/T3HX19VC
DescriptionA week after the first time they worked with the World Series problem, Ankur, Jeff, Michael, and Romina met a second time to work on the World Series problem. Brian was not available for this session. Researcher Bob Speiser, who had not been present the week before, asked the students to explain their work on the World Series problem. While explaining the problem to Researcher Speiser, the group creates an area model to represent a two game series. Romina explains that although this was a model of a two game series, their results could be generalized. Michael explains his use of binary notation and the relationship the group found between their results and entries in Pascal's Triangle. Researcher Speiser poses a more general version of the World Series problem, asking what would happen if the teams were not equally matched. The students were asked to consider the outcomes under the condition that the home team is twice as likely to win as the away team. The students worked on the problem using various strategies (e.g., multiplying, listing all possibilities, area model) for approximately an hour. The students present their solution to Researcher Speiser and Researcher Maher who then shows the group a solution to the problem produced by another student. Researcher Maher said she found the solution confusing and asked the group how they would respond to the student. The group tries to make sense of the other student's work and compares their work to the other student's. Michael conjectures that the two solutions are correct answers but to different questions. Ankur, Jeff, and Romina write a letter to the other student saying: "Your 70 possibilities are not equally likely to happen. One of your possibilities is winning 4 out of 4 games and another is 4 games out of 7. They are not equally likely to happen. Your probability means nothing." The session ends with Researcher Maher saying that she will deliver the groups letter to the student. The World Series Problem: In a World Series two teams play each other in at least four and at most seven games. The first team to win four games is the winner of the World Series. Assuming that the teams are equally matched, what is the probability that a World Series will be won: a) in four games? b) in five games? c) in six games? d) in seven games?
Math StrandCombinatorics, Probability
Math ProblemWorld Series
NCTM Grade Range9-12
NCTM Content StandardNumber and operations, Algebra, Data analysis and probability
NCTM Process StandardProblem solving, Reasoning and proof, Communication, Connections, Representation
Forms of Reasoning, Strategies and HeuristicsReasoning by cases, Direct reasoning, Proportional reasoning, Referencing a previous problem, Multiplicative reasoning
Grade Level11
Student ParticipantsJeff (student), Michael A. (Kenilworth, student), Romina (student), Ankur (student)
MediatorsMaher, Carolyn Alexander (Researcher), Speiser, Robert (Researcher)
CorporateDavid Brearley High School (Kenilworth, N.J.)
SettingClassroom
Student GenderMixed
Student EthnicityMixed
Camera ViewsStudent view
RightsThe video is protected by copyright. It is available for reviewing and use within the Video Mosaic Collaborative (VMC) portal. Please contact the Robert B. Davis Institute for Learning (RBDIL) for further information about the use of this video.
Date Captured1999-01-29
Local IdentifierB39-19990129-KNWH-SV-CLASS-GR11-PROB-WS-RAW
Related Publication
Type: Related publication
Label: Ed.D. dissertation references the video footage that includes B39, Revisiting the World Series problem (student view), Grade 11, January 29, 1999, raw footage
Date: 2000
Author: Kiczek, Regina Dockwiler (Rutgers, the State University of New Jersey)