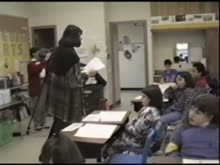 The infinite number line, Clip 2 of 4: Placing integers on the number line [video]. Retrieved from https://doi.org/doi:10.7282/T3PV6HZZ

TitleThe infinite number line, Clip 2 of 4: Placing integers on the number line
PublisherNew Brunswick, NJ: Robert B. Davis Institute for Learning, , c1993-11-03
Persistent URLhttps://doi.org/doi:10.7282/T3PV6HZZ
DescriptionIn the second clip researcher Carolyn Maher stated that the class would be studying pieces of the number line. She referred to the homework from the prior session and stated that the class was supposed to place fractions between the numbers, zero and two. Alan stated that he had placed the number “one” half way between the numbers zero and two. The researcher asked the class where they would place the numbers “three” and “four” on the number line, to which responded. By and measuring with a ruler the distance between one and two, she used the same length to place two. Jessica again used the ruler to copy the length on the projected line to mark four. The researcher asked the class where they would place a million and about the arrow going in the opposite direction. Amy responded that it was for negative numbers. Amy came up to the overhead and placed the number “negative one” using a ruler. The researcher asked about the number “negative two”. Amy followed with placing “negative two” on the line. The researcher commented that the class was telling her something about where to place positive and negative numbers. Kimberly said that negatives were beyond zero to the left and that positive numbers would beyond zero to the right on the number line. Alan added that he thought all numbers to the left of zero would be negative and all numbers to the right of zero would be positive. The researcher asked the class if they knew what to call the whole numbers to the left and right of zero. The students indicated that they did not know, and the researcher then introduced the word integer and wrote it on the overhead projector, as well as set notation for integers to include the set of negative and positive whole numbers, indicating that the set is infinite {…, -2, -1, 0, 1, 2, 3,…} next to the word integer.
Math ToolRulers
Math StrandFractions
Math ProblemPlacing fractions on a number line
NCTM Grade Range3-5
NCTM Content StandardNumber and operations
NCTM Process StandardProblem solving, Reasoning and proof, Communication, Connections, Representation
Forms of Reasoning, Strategies and HeuristicsDirect reasoning
Grade Level4
Student ParticipantsAlan (student), Amy (student), Audra (student), Erik (student), Jessica (student), Kimberly (student)
MediatorsMaher, Carolyn Alexander (Researcher)
CorporateConover Road (Colts Neck, N.J.)
SettingClassroom
Student GenderMixed
Student EthnicityWhite
Camera ViewsClassroom view, Presentation view, Side view
RightsThe video is protected by copyright. It is available for reviewing and use within the Video Mosaic Collaborative (VMC) portal. Please contact the Robert B. Davis Institute for Learning (RBDIL) for further information about the use of this video.
Date Captured1993-11-03
Local IdentifierB10B11B12-FRC-CMPRF-CLIP002
Related Publication
Type: Related publication
Label: Ed.D. dissertation references the video footage that includes The infinite number line, Clip 2 of 4: Placing integers on the number line
Date: 2010
Author: Schmeelk, Suzanna E. (Rutgers, the State University of New Jersey)