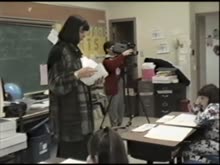 TitleThe infinite number line, Clip 1 of 4: Naming points on the number line
PublisherNew Brunswick, NJ: Robert B. Davis Institute for Learning, , c1993-11-03
Persistent URLhttps://doi.org/doi:10.7282/T3K35S8D
DescriptionResearcher Carolyn Maher began the session in clip 1 by stating that the class was discussing rulers at the end of the prior session. The researcher pointed out that rulers may be constructed differently and then used Jessica’s ruler to illustrate. The researcher continued by asking the students if they recalled Alan’s idea when they were talking about a twelve inches rod. A show of hands indicated that students in the class responded affirmatively. The researcher indicated that Alan said that all the lengths [distance between markings] were exactly the same. The researcher further stated that it would not matter which inch a person pulled out of a ruler as all the lengths of an inch are the same. She also reminded the students a comment David made during the previous session where he commented that that it would be a good idea to number inch markings on a ruler to save the user the time of adding all the one inches together. The researcher asked the students to imagine moving from rods to a ruler, then to a number line. She explained to the students that they would be studying the placement of numbers on the number line for a number of years—through high school. The researcher suggested that the students should question where the numbers belong on the number line as they go through more advanced classes. The researcher then discussed some number line ideas. First, she asked the students if there is a biggest number on the number line. They said nothing was the biggest. The researcher then continued by giving examples of big numbers and finding a bigger number simply by adding one to the big number. The researcher also asked the students if there was a smallest number and introduced negative numbers. She then told the students that a number line is made up of points. Michael talked about learning about segments and sections in their math class the previous year. Then, the researcher introduced the idea of infinity, which mathematicians found useful when there are too many of something to count. Erik stated that the definition of infinity suggests that it “keeps going, it never stops.” The researcher ended off by asking the students how many numbers can be put on the number line. The students responded that it would take too much time.
Math ToolRulers
Math StrandFractions
Math ProblemPlacing fractions on a number line
NCTM Grade Range3-5
NCTM Content StandardNumber and operations
NCTM Process StandardProblem solving, Reasoning and proof, Communication, Connections, Representation
Forms of Reasoning, Strategies and HeuristicsDirect reasoning
Grade Level4
Student ParticipantsAlan (student), Andrew (student), Brian F. (Colts Neck, student), David (student), Erik (student), Jessica (student), Michael (Colts Neck, student)
MediatorsMaher, Carolyn Alexander (Researcher)
CorporateConover Road (Colts Neck, N.J.)
SettingClassroom
Student GenderMixed
Student EthnicityWhite
Camera ViewsClassroom view, Presentation view, Side view
RightsThe video is protected by copyright. It is available for reviewing and use within the Video Mosaic Collaborative (VMC) portal. Please contact the Robert B. Davis Institute for Learning (RBDIL) for further information about the use of this video.
Date Captured1993-11-03
Local IdentifierB10B11B12-FRC-CMPRF-CLIP001
Related Publication
Type: Related publication
Label: Ed.D. dissertation references the video footage that includes The infinite number line, Clip 1 of 4: Naming points on the number line
Date: 2010
Author: Schmeelk, Suzanna E. (Rutgers, the State University of New Jersey)