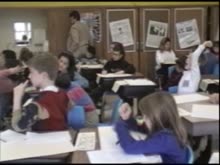 TitleThe number line and equivalent fractions, Clip 1 of 1: Multiple representations for equivalent fractions
PublisherNew Brunswick, NJ: Robert B. Davis Institute for Learning, , c1993-11-12
Persistent URLhttps://doi.org/doi:10.7282/T3TM78PP
DescriptionIn this clip researcher Carolyn Maher asked Graham what his argument would be for why two fourths could be labeled one half. He replied that one half plus one half would equal a whole and that two fourths plus two fourths would be a whole. Erik stated that what Graham had said was true; however, he thought that two fourths and two fourths would equal four fourths which would be the same as a whole. The researcher wrote Graham’s statements on the chalk board. The researcher commented that the students were adding fractions. She then asked David to share his argument. David replied that he was thinking four fourths equals one half which equals two halves. Erik countered the statement by saying four fourths equal to one whole. David said that that was what he meant. Researcher Amy Martino suggested that David put his picture on the board; and, David drew a rod model where he showed the top level to equal a whole, the second level to represent fourths and the third level halves. The researcher extended the model to a number line and asked David to label the tic marks at the lower portion of his drawing. He did so appropriately. The researcher asked the class if that helped them; they replied affirmatively. James said that he had another way to prove one half was equal to two fourths. He drew two circles on the board: the left circle he divided into fourths and the right circle he broke into halves. He shaded two fourths accordingly on the left circle and shaded one half accordingly on the right circle. He said they were equal. When asked by the researcher, the class replied that they agreed with what James had drawn.
Math StrandFractions
Math ProblemPlacing fractions on a number line
NCTM Grade Range3-5
NCTM Content StandardNumber and operations
NCTM Process StandardProblem solving, Reasoning and proof, Communication, Connections, Representation
Forms of Reasoning, Strategies and HeuristicsDirect reasoning, Indirect reasoning
Grade Level4
Student ParticipantsGraham (student), Erik (student), David (student), James (student), Kelly (student), Jessica (student), Jacquelyn (student)
MediatorsMaher, Carolyn Alexander (Researcher), Phillips, Joan (Teacher)
CorporateConover Road (Colts Neck, N.J.)
SettingClassroom
Student GenderMixed
Student EthnicityWhite
Camera ViewsClassroom view, Presentation view, Side view
RightsThe video is protected by copyright. It is available for reviewing and use within the Video Mosaic Collaborative (VMC) portal. Please contact the Robert B. Davis Institute for Learning (RBDIL) for further information about the use of this video.
Date Captured1993-11-12
Local IdentifierB13B14B15-FRC-CMPRF-CLIP001
Related Publication
Type: Related publication
Label: Ed.D. dissertation references the video footage that includes The number line and equivalent fractions, Clip 1 of 1: Multiple representations for equivalent fractions
Date: 2010
Author: Schmeelk, Suzanna E. (Rutgers, the State University of New Jersey)