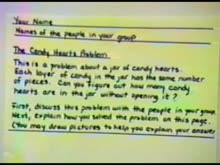 TitleNon-routine counting problems, Clip 3 of 8: Candy hearts interview with Stephanie
PublisherNew Brunswick, NJ: Robert B. Davis Institute for Learning, 1990-02-26, c1990-02-26
Persistent URLhttps://doi.org/doi:10.7282/T3RF5WP1
DescriptionIn the third of 8 clips with second grade students, researcher Amy Martino interviews Stephanie about how she and her group, which included Jeff and Brian, had approached the candy hearts problems in their classroom session several days earlier. In explaining her solution, Stephanie first says that the three students had all "timesd it", multiplying 12 times 4 to get 48. She then recalled that she had completed the problem by first adding the 10 from the fifth layer of 12 to 48 to get 58. For the remaining 2, Stephanie appears to use the addition algorithm, adding 2 to 8, then "trading the 1 for a 10" for an answer of 60. When asked about the second problem, Stephanie said that Jeff had contributed the number 20 for each child and that he had said there would be 20 left over. She then said that she had decided to distribute the remaining 20 among all the students, that each child would get one extra, or 21, and that there would still be 10 left over. She concluded by saying that this would give another candy heart to each child, resulting in 22 for each. (Note: The original video of the classroom session has been lost. However, our notes indicate that there were 20 children in the class, six groups of 3 and one group of two, which raises questions about how there could be 2 extra candies for each child.)
When Martino asks the first extension problem, Stephanie replies by adding 10 to the 60 to get 70. She continues by first saying that the total would be 74. When Martino asks her to explain, Stephanie changes her total to 80, explaining that the extra 10 would result from adding the 2's from each layer to get another 10. For the second extension problem, Stephanie sits quietly for some time and then responds 24. She explains that she added 6 and 6 for 12, then another 6 for 18 and a final 6 for the total 24. She quickly said that it would have been easier to add 6 and 6 for 12 and then to add a second 12 for the same total.
First Candy Heart Problem Statement (on yellow paper)
This is a problem about a jar of candy hearts.
Each layer of candy in the jar has the same number
of pieces. Can you figure out how many candy
pieces are in the jar without opening it?
First, discuss this problem with the people in your group.
Next, explain how you solved the problem on this page.
You may draw pictures to help you explain your answer.
Second Candy Heart Problem Statement (on pink paper)
Our jar has _______pieces of candy.
All the jars have the same number of candy hearts.
Imagine that we collect all the jars of candy
and decide to share all the candy hearts.
Each person in the room has to get the same number
of candy hearts. Figure out how many candy hearts
Each person would get without opening the jars.
Explain how you solved the problem on this page.
You may draw pictures to help explain your answer.
First Candy Heart Problem Extension
Suppose we added another layer to the candy jar
with the same number of candy pieces as the other layers.
How many candy pieces would be in the jar?
Second Candy Bar Problem Extension
Imagine another candy jar with four layers.
Each layer has 6 candy pieces. How many candy pieces would be in this jar?
Math ToolLayered candy jar
Math StrandArithmetic
Math ProblemCandy heart problem
NCTM Grade RangePreK-2
NCTM Content StandardNumber and operations
NCTM Process StandardProblem solving, Reasoning and proof, Communication, Connections, Representation
Forms of Reasoning, Strategies and HeuristicsCounting, Direct reasoning
Grade Level2
Student ParticipantsStephanie (student)
MediatorsMartino, Amy Marie (Researcher)
CorporateHarding Elementary School (Kenilworth, N.J.)
SettingClassroom
Student GenderFemale
Student EthnicityWhite
Camera ViewsStudent view
RightsThe video is protected by copyright. It is available for reviewing and use within the Video Mosaic Collaborative (VMC) portal. Please contact the Robert B. Davis Institute for Learning (RBDIL) for further information about the use of this video.
Date Captured1990-02-26
Local IdentifierB55-ARTH-CH-CLIP002
Source
Title: B55, Candy hearts interviews, Grade 2, February 26, 1990, raw footage.
Identifier: B55-19900226-KNWH-SV-CLASS-GR2-ARTH-CH-RAW