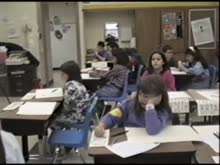 TitleThe infinite number line, Clip 3 of 4: How many numbers between 0 and 1?
PublisherNew Brunswick, NJ: Robert B. Davis Institute for Learning, , c1993-11-03
Persistent URLhttps://doi.org/doi:10.7282/T3CN72GT
DescriptionIn the third clip researcher Carolyn Maher stated that similarly to the number line going on and on forever, so does the numbers in between zero and one. The students then explored dividing the line segments into zillionths, billions and googles. Alan commented that a person could divide the smallest of fractions into zillionths. He continued to say that after you divided the smallest of fractions into zillionths that there would still be space in between. Michael added that a person would need the biggest number line in the world. Erik countered that it did not make sense and Alan replied that it did make sense. The researcher intervened and asked Erik if that were still true if the one whole were changed to a zillion. Erik stated if the whole were a zillion, then they could divide it into zillionths. Andrew stated that if a person put the number line under a magnifying glass then they would be able to see that there was space left between the one hundredth and the one thousandth. Alan extended the idea and suggested placing the number line under a microscope to enlarge the line and see that there was still more space in there. The researcher asked what scientists find in the sky when they use more powerful telescopes. The students responded that they find more and more stars. Erik, then, said that he did not understand that when a person uses a microscope to get more space, in reality a person is not getting more space. Andrew responded that actually a human eye cannot see the space. Erik and Alan bantered about their statement meanings. Alan followed with a hypothetical situation where a person had a very small pen and drew a small line then the space between the line (the zillionth) and the zero would have unknown space to the human eye, but you could see it under a microscope. The researcher intervened and said that Erik might be interpreting more space to mean extending the length of the segment. Erik replied affirmatively. The researcher commented that both students had different pictures in their heads. Alan and Brian talked about difficulty for the human eye to see dust particles. Brian commented that a dust particle was like the zillionths and trillionths. Alan agreed. David commented that with a microscope a person is only seeing closer not seeing more. The researcher then asked the class what they thought of the class discussion and Audra, Jessica, Mark, David and Michael offered support or further comments to the arguments. The researcher asked the class to give number names to the tiny little lines and called on Alan, who drew an enlarged portion of the number line and showed the class all the space between the zero and the hundredth on the enlarged portion of the line. He said you could now divide that space into halves, thirds, fourths, and fifths. The researcher invited comments, to which David and Andrew, Brian and Meredith responded. Alan continued that you could keep on acting on the number via magnifying, magnifying, dividing, magnifying and dividing it.
Math ToolRulers
Math StrandFractions
Math ProblemPlacing fractions on a number line
NCTM Grade Range3-5
NCTM Content StandardNumber and operations
NCTM Process StandardProblem solving, Reasoning and proof, Communication, Connections, Representation
Forms of Reasoning, Strategies and HeuristicsReasoning by analogy, Direct reasoning, Recursive reasoning
Grade Level4
Student ParticipantsAlan (student), Amy (student), Andrew (student), Audra (student), Brian F. (Colts Neck, student), David (student), Erik (student), Gregory (student), James (student), Jessica (student), Mark (student), Meredith (student), Michael (Colts Neck, student)
MediatorsMaher, Carolyn Alexander (Researcher)
CorporateConover Road (Colts Neck, N.J.)
SettingClassroom
Student GenderMixed
Student EthnicityWhite
Camera ViewsClassroom view, Presentation view, Side view
RightsThe video is protected by copyright. It is available for reviewing and use within the Video Mosaic Collaborative (VMC) portal. Please contact the Robert B. Davis Institute for Learning (RBDIL) for further information about the use of this video.
Date Captured1993-11-03
Local IdentifierB10B11B12-FRC-CMPRF-CLIP003
Related Publication
Type: Related publication
Label: Ed.D. dissertation references the video footage that includes The infinite number line, Clip 3 of 4: How many numbers between 0 and 1?
Date: 2010
Author: Schmeelk, Suzanna E. (Rutgers, the State University of New Jersey)