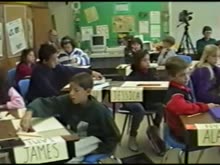 TitleBuilding large models to show equivalence, a generalization, Clip 3 of 3: Generating multiple models by doubling
PublisherNew Brunswick, NJ: Robert B. Davis Institute for Learning, , c1993-10-11
Persistent URLhttps://doi.org/doi:10.7282/T3FB51J2
DescriptionIn the third clip researcher Carolyn Maher asked David to share the theory that he had formulated with the class. David, with some assistance from Erik, said that Meredith had originally built a model using a train of one orange, one blue, and one black rod as one, and that the white rod was one twenty-fourth and the red rod was one twelfth. As David spoke, researcher Maher built the model that he had described at the overhead projector. The students then saw a discrepancy in David’s model, and Alan and Erik showed the contradiction in David’s model. Alan and Erik stated that the reds couldn’t be twelfths and the whites couldn’t be twenty-fourths. The researcher asked Andrew and Jessica to share the model that they had built with the class. Referring to the twenty-four centimeter-long model that he had replicated on his desk Andrew explained the model to the class. The researcher asked Andrew if one brown was called one third. Andrew and Jessica clarified that he had considered two brown rods placed end to end to be one third. The researcher asked Andrew and Jessica to build the model using large Cuisenaire rods at the front of the room. They did so, and repeated their justification for their solution three times to different groups of students. The researcher asked David if Andrew and Jessica’s model was linked in any way to the theory that he had tested. David and Erik responded that it did, since they had thought that the white rods would be forty-eighths and that the red rods would be twenty-fourths, just as Andrew’s model had shown. Alan and Erik then noted that there was a relationship between the two larger models that had been built and that everything was basically doubled. The researcher continued Alan’s direct train of thought by describing the models that had been built, saying that one model contained an orange and red train and the other a train of two orange rods and a purple rod. She asked the class if the models were related in any way. Alan repeated that it was basically just doubled. The researcher pointed out that the first model (composed of the orange and red train) that James had built did not contain any purple rods. Alan responded in a manner that indicated that he had misunderstood the question that the researcher had posed. James then explained why the smallest model that had been built did not contain a purple rod. James showed that Alan’s pattern could be used to show that the second model was twice the length of the first. Alan then continued his original train of thought, explaining again that the third model was twice the length of the second. The researcher then repeated her question. She asked how the second model was double the length of the first and Kimberly explained :“Well, they used a purple and the red, two reds make a purple, so now if they have a purple, they doubled the red”. The researcher asked the class to predict what the third model should look like if there indeed was a doubling pattern inherent in the models. Danielle stated that the train would be composed of four orange rods and two purple rods, and Erik and Alan confirmed that that was the case. The researcher continued to question the students about this pattern. She asked them to predict what the next model would look like. Brian said that the length of the train would equal forty-eight white rods. The researcher pointed out that the third model that had been built was that length. Brian conceded that he was mistaken. Andrew predicted the length of the next model, saying that the train would be composed of eight orange and two brown rods. Alan challenged Andrew’s reasoning by using an argument he had used in previous sessions (that you can’t third it). Erik said that one could third it by using a train. Andrew predicted that the thirds would be three brown rods and that the fourths would be three dark greens. David repeated Erik’s argument, saying that thirds could be made using trains of rods. Alan then concluded by saying he meant you couldn’t third it by using only one rod
The researcher asked if a model could be built that was bigger than the one Andrew had described. Erik described what it would like if it was doubled. With that, The researcher closed the session, and asked the students to think and write about the question: Is there a biggest model?
Math ToolCuisenaire rods
Math StrandFractions
Math ProblemFraction as number, Comparing fractions, Equivalent fractions
NCTM Grade Range3-5
NCTM Content StandardNumber and operations
NCTM Process StandardProblem solving, Reasoning and proof, Communication, Connections, Representation
Forms of Reasoning, Strategies and HeuristicsDirect reasoning, Recursive reasoning, Reasoning by upper and lower bounds
Grade Level4
Student ParticipantsAlan (student), Andrew (student), Brian F. (Colts Neck, student), Danielle (student), David (student), Erik (student), James (student), Jessica (student), Kimberly (student), Meredith (student), Michael (Colts Neck, student)
MediatorsMaher, Carolyn Alexander (Researcher)
CorporateConover Road (Colts Neck, N.J.)
SettingClassroom
Student GenderMixed
Student EthnicityWhite
Camera ViewsClassroom view, Presentation view, Side view
RightsThe video is protected by copyright. It is available for reviewing and use within the Video Mosaic Collaborative (VMC) portal. Please contact the Robert B. Davis Institute for Learning (RBDIL) for further information about the use of this video.
Date Captured1993-10-11
Local IdentifierA94A95A96-FRC-CMPRF-CLIP003
Related Publication
Type: Related publication
Label: Ed.D. dissertation references the video footage that includes Building large models to show equivalence, a generalization, Clip 3 of 3: Generating multiple models by doubling
Date: 2009
Author: Yankelewitz, Dina (Rutgers, the State University of New Jersey)